(Took a day off with hubby and we went movie watching! In order of awesomeness - Bridge of Spies, Crimson Peak, The Last Witch Hunter. Only have time to review one though, so picking the best of the three.) :) 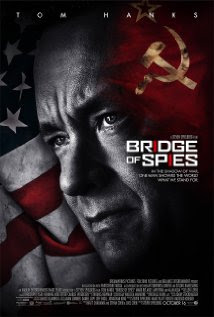 Premise: After a Soviet spy is caught on American soil, James B. Donovan is asked by his firm and peers to represent Rudolf Abel in a criminal trial for espionage. Accepting, Donovan tries to fight for Abel as he would any other client, believing that a fair trial and due process encompass what makes America and Americans what/who they are. When one of our own is shot down over Soviet Airspace, Donovan gets asked by the government to act as a mediator for negotiations for a prisoner exchange to had Able over for Powers, but he must do so as a private citizen. The murky waters he swam in before, just got deeper and darker. (PG-13)

1) Acting - Total Thumbs Up: Awesome performances all the way around. Tom Hanks was very likeable as the "boy scout" James B. Donovan. Mark Rylance was fantastic as Rudolf Abel - he is one capable spy! "Cool as a cucumber", too! And a nice guy to boot. Lots of fun give and take between Tom Hanks and Mikhail Gorevoy and Sebastian Koch.

2) Special Effects - Total Thumbs Up: From drive by's to exploding spy planes, all the special effects were top notch.

The train scene will stay with you for a while. :) The building of the Berlin Wall was disturbing in all sorts of ways.

3) Plot/Story - Total Thumbs Up: The film is based on "true events" but these occurred a little before my time, so I can't state on the accuracy one way or another. But it seemed thorough, giving multiple sides of a number of issues. I liked the fact you didn't get a lot of 'cutout' characters in the story. If anything, they surprised me several times in this area and they even gave unexpected depth to side characters which made them seem more real, and this in turn added to the believability and depth of the story as a whole.

People are people - and the plot doesn't shy from showing that. Even the good guys can be bad and the bad guys be good. And what the public or others believe is not always the truth. Also shows plainly how the interests of different parties can make even simple things extremely complicated. Oi!

As good movies do, you feel fully invested and moved by what's going on by the end of the film. The fact they show how Donovan's home life and family were affected by the decisions he made, added a nice touch, and some depth to what he might lose. There were also a ton of little moments full of levity, which just made the movie all the more fun.

4) Locations/Cinematography - Total Thumbs Up: Filmed in multiple locations in Germany as well as in the US, the camera work was excellent. Lots of attention to detail in recreating the late 1950's at home and abroad. As I mentioned earlier, the train scene (you'll know the one, you can't miss it) will stick with you - and the cinematography for it worked extremely well there and again when done in a different but correlating way in Brooklyn.

Following Pryor as he bicycles down the road looking for a break in the quickly rising Berlin Wall and the chaos on both sides made for a subtle but strong scene. Especially when he comes back.

5) Music - Total Thumbs Up: The soundtrack by Thomas Newman is very reminiscent of John Williams' work, which Spielberg has used on a lot of his films (and for good reason!), and was the perfect touch for setting mood and pacing during several places in the film.

Conclusion: Bridge of Spies is a thought provoking, fascinating film on a topic and period of our history not often talked about. Strong actor performances and plenty of little touches and surprises make the whole work a definite worthwhile experience.

Rating: 4 out of 5 (Hubby's Rating: Worth Paying Full Price to See Again)