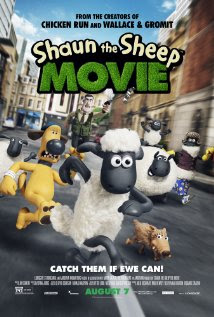 Premise: Bored with the daily grind at the farm, Shaun decides that what they need is a day off. In order to get it, he orchestrates an elaborate plan to distract Bitzer, the dog, and lull the Farmer back to sleep. At first going off without a hitch, things soon go in unexpected directions, especially when the small trailer they put the Farmer in suddenly rolls off down the road towards the Big City. (Rated PG)

1) Voice Acting - Total Thumbs Up: If any of you have seen the movie, you may be raising your brows at this point. Yes, no coherent words are spoken in the film except for one or two, but the meanings of what they are saying is implied, which means Justin Fletcher, John Sparkes, Omid Djalili, and the rest had to rely on inflection on nonsensical murmurings to make themselves understood. And they did a beautiful job of it. Because these are animated sheep, not everything could be conveyed from just their expressions, so the voice actors had to work at getting the moods and feelings across and they did it very well.

2) Artwork/Animation - Total Thumbs Up: Aardman Studios has been making stop motion animated films for many years. They also use many other techniques to get their stories across aside from stop motion animation - though that's where they started back in the 90's. You've probably seen their work and never realized it. Though their roots are in England, they've done work for groups all over the world.

Their stop animation work is lovely. The main art style they use for these is very apt for the medium. Lots of great detail and smooth motion. The visual gags run really well, and keep an eye on the backgrounds for subtle jokes - like the sign for Big City saying "Big City" in several languages as if it was an actual name. Or the one saying "Convenient Quarry."

The first sequence when the film begins is priceless. The happy days and the drudgery now felt by all is evident and humorous.

Using pop culture references in different, imaginative contexts served them very well. The whole sequence at the Animal Containment Center even borrowed bits from Silence of the Lambs. (How could they resist? It's a sheep movie! Ewe?) That section alone was full of prison movie references as well. Great job.

3) Plot/Story - Thumbs Up: Shaun the Sheep comes from a well beloved series on British Television. (You can actually see episodes of it on Amazon Video and other show carriers.) It's mainly a kids' show, but one with enough 'meat' that it is still entertaining enough for adults to enjoy.

The film takes us back to the beginning - so it's a prequel of sorts. The topics covered are actually rather deep - living only to work, losing sight of what's important and who you love, taking things for granted, realizing that actions have consequences - and most importantly that there's no place like home. Yet these topics are presented in such a way that kids may not entirely realize what they're being shown (not to where they realize the true darkness they harken) but the adults definitely will.

There pace is brisk, so the kiddos are well entertained. The adults will have fun with the phenomenon of Mr. X and also the Animal Containment Center's A. Trumper. He's a hoot.

The humor seemed somewhat more spartan than usual in this particular film. A bit more would have raised the overall enjoyment.

It is a film for kids, so there so expect plenty of fart jokes. :) Shaun's inventiveness at a couple of spots were totally amusing.

Conclusion: Shaun the Sheep Movie is a nice compliment to those already acquainted with the series and characters. For those not acquainted with them, it's a rather nice introduction. Deep subjects for the adults, fun for the kids, but it was a little light on the humor. Still, a nice enjoyable bit of animation.