(Hubby has a cutover so Movie Friday is out this week...luckily I saw 3 movies last week! Woot!) 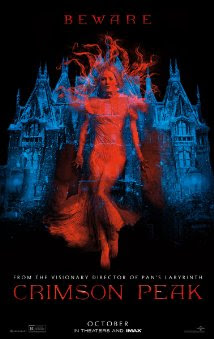 Premise: Edith knows ghosts exist. But aside from a warning from her dead mother to beware Crimson Peak when Edith was a child, she's not had much to do with the supernatural. But when she meets Thomas Sharpe, an earl from England, she receives a second warning, but still doesn't understand to what it pertains. Will she be able to decipher the warning before it's too late? (Rated R)

2) Special Effects - Total Thumbs Up: The special effects teams came up with a lot of lovely items for the film. From the semi-opaque ghosts to the recently deceased, they did some really nice work. The bathhouse scene was graphic, shocking, and nicely detailed.

The rickety elevator and the workings of the different sized digging contraptions were great. Add in the slow hints of the snow absorbing the clay's reddish color, then culminating it in a gorgeous scene as the whole mountain changes, gave a lovely visual for what is going on inside the house.

The house itself is marvelous! Half rotted, half maintained, it screams of the state of those who live there and those who are still there.

3) Story - Thumbs Up: If you like slasher films, this movie is not for you. Crimson Peak is a combination of creepy Victorian  Hammer film like horror and murder mystery rather than a slash/fright fest with mounting body counts and creative new ways to kill. The fun in this film is knowing things will get bad, seeing how they're going to get there, and then going along for the ride as the events unfold. Like any good Victorian drama, it builds over time.

That being said, the who is pretty obvious right away, but the details and some of the subtext do keep it interesting. The ghosts just add to the excitement and anticipation. (Though the previews hinted at other supernatural happenings being connected/wrapped up in the reason for the murders, there aren't any. A little disappointing...)

The only major let down was a contrivance (or outright visual lie) of a reveal shown to the audience in the bathhouse scene which is not actually true. I can only assume they did it to curtail any sympathy the audience might be feeling for one of the characters and to keep hidden the true force behind certain decisions. And while it worked in that capacity up front, it also leaves you with a sour taste when the scene is replayed later and the true culprit shown. (Also, Edith turning weird at the autopsy room didn't entirely jyve with the young and 'modern' woman she was portrayed to be.)

The house is a character in the film all its own, used several ways to symbolize the souls of those who live there and the horrors it has witnessed. There are several interesting dichotomies between the characters as well, so kudos for that.

4) Locations/Cinematography - Total Thumbs Up: Filmed in Dundurn Castle, Casa Loma, and Victoria College as well as other locations in Canada, the film crew had some awesome places to pull from for the different homes of the American rich as well as for Crimson Peak itself.

Panned back views of the grounds and that first initial introduction to the house were done exceptionally well. Between the locations and how we're shown them, a nice sublayer of story and symbolism were skillfully incorporated into the whole.

5) Costuming/Makeup - Total Thumbs Up: As the house was used to give visual subtext and story, so were the costumes and makeup. A lot of subtle touches in the clothes used worked to elevate Edith from young modern girl to white innocence and purity clashing in direct contrast with Lucille's almost opposite dispositions - Edith as a conduit of love, future, hope and Lucille's stiffness, always looking to the past, and shrivelling ever deeper into the darkness.

Their work with the special effects department for a scene close to the end with Thomas was so well done it will make you cringe to see it. :P

Conclusion: If you enjoyed The Woman in Black, you will probably like Crimson Peak. It's an old fashioned murder mystery with ghosts added for extra flavor. The ghosts and house look fabulous in IMAX.