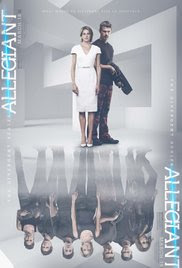 Directed by: Robert Schwentke Screenplay by: Noah Oppenheim, Adam Cooper, and Bill Collage Based on the novels by: Veronica Roth Cinematography by: Florian Ballhaus Music by: Joseph Trapanese

Premise: Though Chicago has been freed from the tyranny of Jeanine's rule, all is not well. Johanna asks Tris to step in as a leader, but Tris has other things on her mind. She desperately wants to follow the message which played after the box was opened and go outside the wall. But it won't be easy - not when Evelyn has decided no one gets to go outside the wall. Tris will find a way. And when she does, matters beyond the wall won't be quite what she expects. (Rated PG-13)

1) Acting - Total Thumbs Up: Shailene Woodley and Theo James bring forth good performances as their characters continue to evolve in this third installment of the Divergent Series. Jeff Daniels is smooth and deceptive as David. Ansel Elgort gets to show more of what he's made of as Caleb starts seeing the truth of things.

2) Special Effects - Total Thumbs Up: The special effects department truly outdid themselves on this one. Awesome little touches that took some of the effects to a new level.

First was the awesome work on the wasteland just outside the city. The color variations, the maze of half exposed warrens, the red rain falling from the sky; all making a truly unique tableau for the characters. The neat half leaning spires with rings (they looked super cool though we never do find out what they are!). The whole effect on the tainted area was rad.

Second was the creation sequence of the Tris' mother's memory area when Tris is submerged into it. The way things came together like falling strings and draping tarps looked fantastic. The destruction sequence of memories later on was pretty darn cool as well.

Third were the lovely Bureau of Genetics spires and later the city of Provenance. Some truly lovely work. The decontamination sequence was also really cool.

And they had so many awesome gadgets! The three disks, the wall of globes, the Director's ship - lots of new gear to love! :) And the visuals for the immersion of those using the spy globes was totally cool.

3) Plot/Story - Thumbs Up: I wasn't so sure I wanted to see this film, but since I'd seen the other two, we took the plunge. I'm glad I did, as the special effects were superb. The story didn't have as many issues as the previous films (if you don't look too hard), which helped a bit. And they actually tried to get the audience up to speed at the beginning - not just drop us off in the middle of the Ocean as they did for "Insurgent".

They did hold up figurative signs screaming of what was about to happen next a time or two. This tendency Hollywood has to have huge pauses right before they kill someone off is a trend I do not understand. The deaths aren't surprising if you stretch and stretch the moment as you figuratively jump up and down so we know it's coming. If you shine such a bright light on it - we won't be surprised! Just disgusted. Duh.

A ton of questions are not answered. David speaks of how everyone must make sacrifices, as he points out the cramped quarters of the non-pure, but they never actually say why he needs all these people! (Or why a man who looks twenty, is in memories from 40 years before and looks the same, while David actually aged. For a while, I thought they might be using genetic material for clones, but nothing ever came up to explain the weirdness.)

I did like how they dressed Tris differently from the others once they were at the Bureau. Not only did it separate them by class, but it also made Tris start to resemble Jeanine.

4) Stunts - Total Thumbs Up: The film has a number of fights, explosions, and more. Some nice Four hand-to-hand combat. And the entire wall escape sequence looked great!

5) Locations/Cinematography - Total Thumbs Up: At the beginning of the film they do a gorgeous, slow sweep of Chicago to remind the audience of the devastation of old and the true state of the city as new scars now plague it's face. With the playing of the recording from the holographic projectors on several of the buildings, it made a great backdrop for giving the audience a quick reminder of what's been going on. Kudos!

As I stated in the special effects section - the regions outside the wall were awesome! We get some super cool overhead shots of the pockmarked surface and the weird discolorations of the ground and the stagnant pools and red creeks. Truly brought home the fact the Earth has seem some super bad times in the past.

All the view shots for the Bureau and Provenance showed both places beautifully. The central building of the Bureau is utterly fascinating!

6) Costuming/Makeup - Total Thumbs Up: Like I mentioned earlier, they did some nice subtle things with Tris' clothes for some nice subtext. They also did fabulous work on coloring the characters' hair and skin from the red rain.

The burn marks imprinted on one of the side character's face and neck were lovely. And the scars on Johanna were also well done. What I did not see, though, were deformities or sores or other issues on the faces of the people living in the fringes. Since that whole area is toxic, I would have expected more visible damage on the people living there - but they all actually looked rather healthy. :P

Conclusion: "Allegiant" makes up for a lot with the fabulous special effects and inventiveness brought to the third film in the series. Don't look too closely at the plot, and you should have a nice viewing experience. :)